How to tell if your Air Jordan 4s are fake?

How to tell if your Air Jordan IVs are fake?

When the Air Jordan IV came out, fakes were very easy to spot. The speckle was off, the mesh was not parallel, and on top of that the shoe heel didn’t have any bump. But today fakes are getting better and better. As a result, it can be very hard to see if the Jordan Retro IV you own right now is a fake or the real deal.

The back heel tab tends to be very thick on fakes. The Jordan Retro IV has a very thing heel tab, so you can spot this very quickly. On top of that, it’s seamlessly attached to the shoes, whereas fakes make it feel like it’s just something extra that doesn’t fit. In addition, the lace tabs are clear for the originals, whereas fakes have paint speckling. 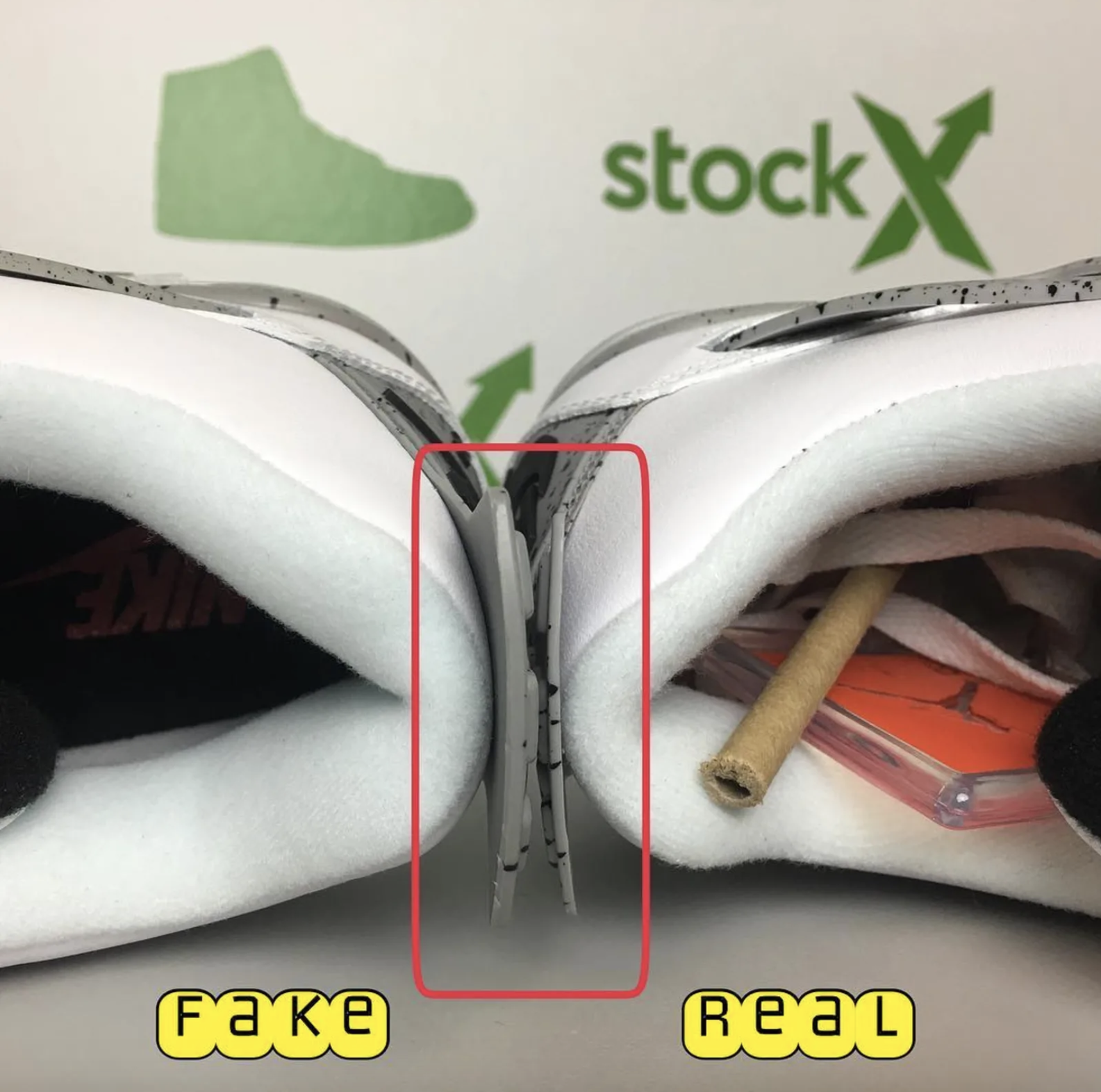 When you see the real shoe trees for the Jordan Retro IV, you will see they have all the information horizontally and there’s no info on the sides. Fakes tend to misplace the labels and that makes them easier to spot. 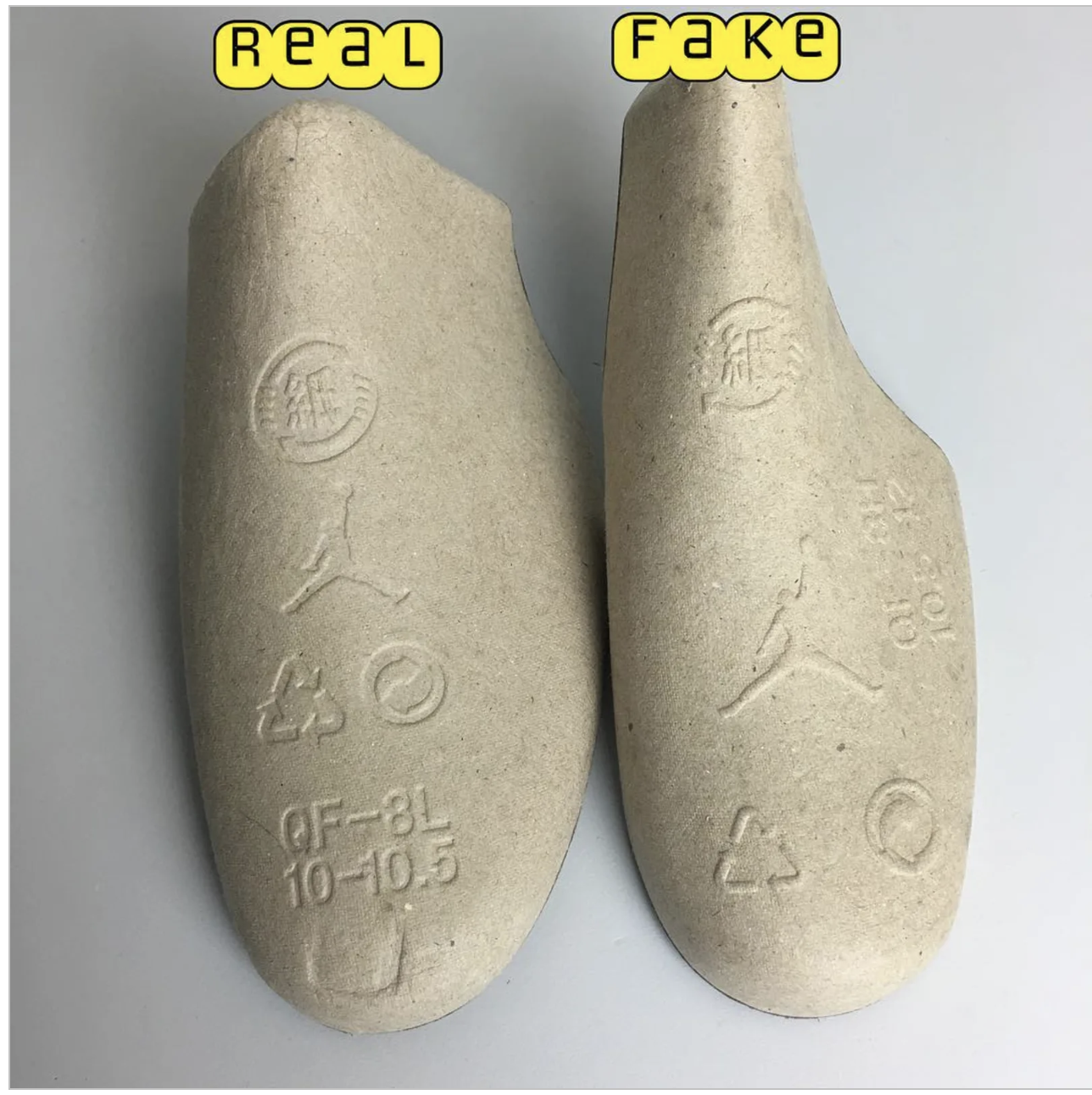 Original Jordan Retro IV will always have the NIKE letters very close to one another. The logo has very good coloring, it’s never faded. If it’s faded, then you are obviously dealing with a fake. The same thing happens with the insole stickers. Fake stickers will not have full black coloring, and they also change the font too. 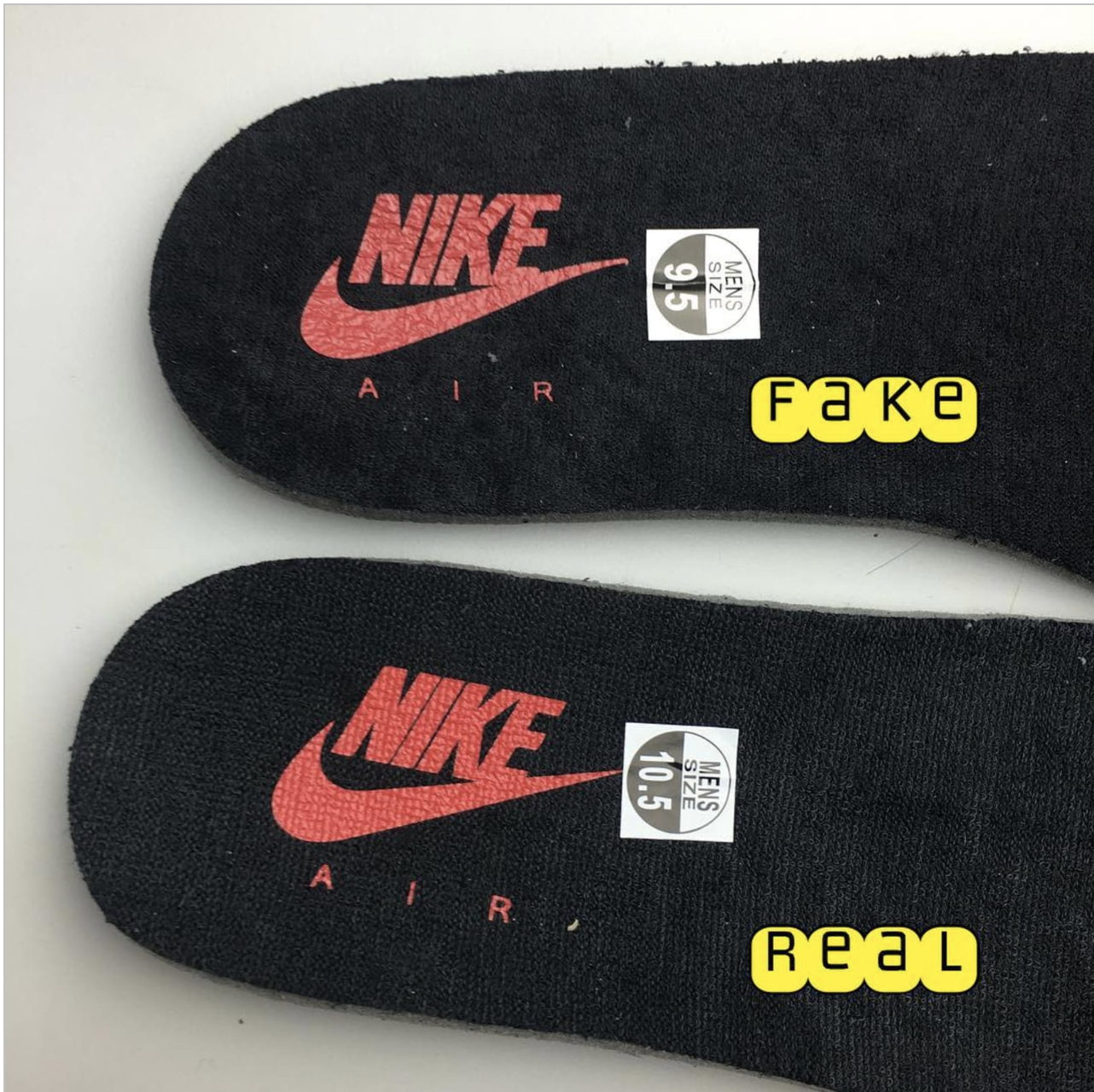 In the case of the fake outsoles, you will notice that the manufacturing is very sloppy. You can find pieces of material hanging on the sides. Obviously that won’t happen with the Jordan Retro IV as the original has pristine coloring and visuals. 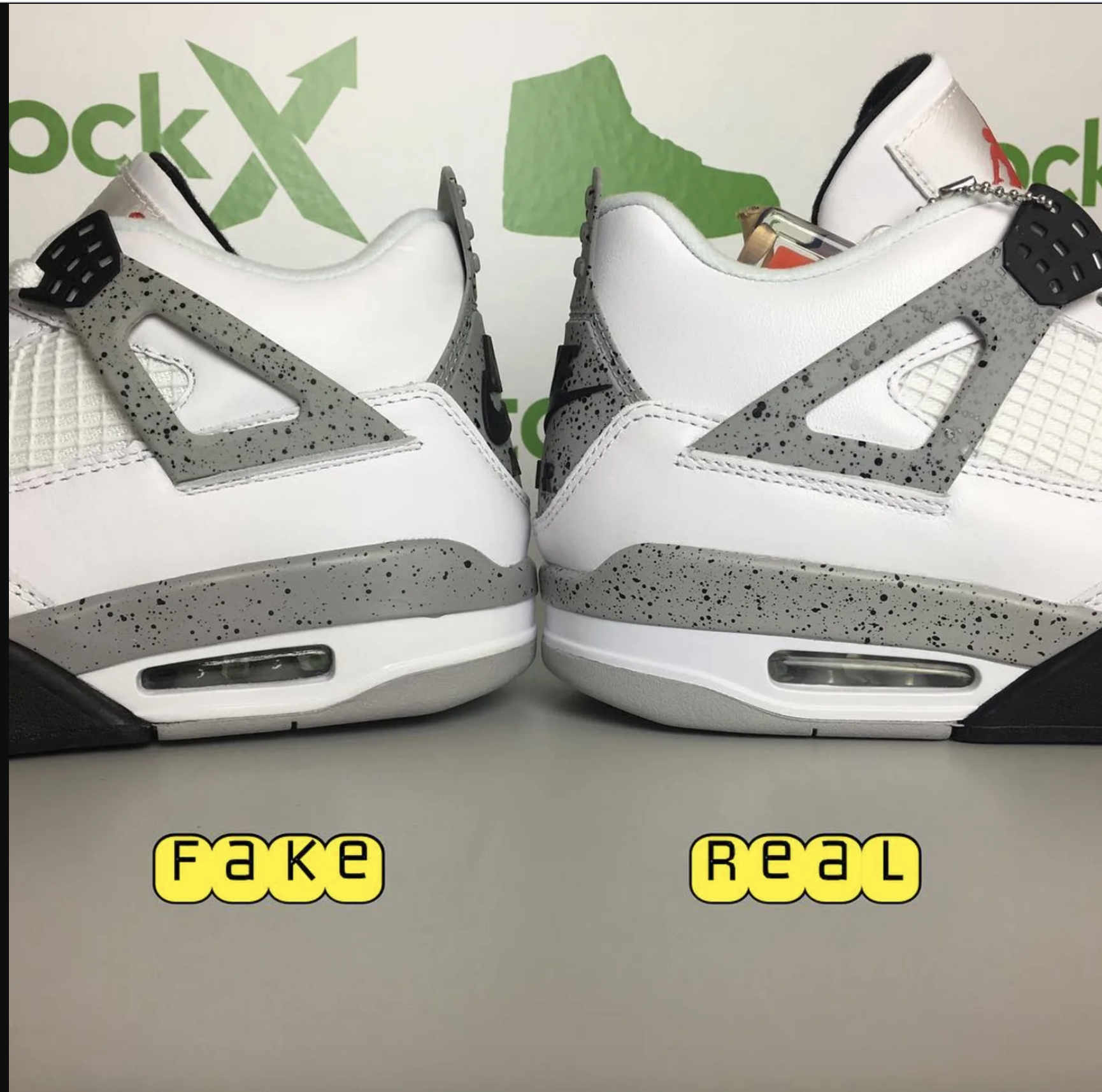 When you look at the original Jordan Retro IV, you will notice that it has a rather long tongue. Fake pairs usually have a shorter tongue, way shorter than the original at any rate. This will give you a good idea of what you need to be looking out for. Speaking of the Jordan Retro IV tongue, the mesh of a fake is very smashes and loose. The original looks a lot better, and it shows a sense of value and quality.

Normally the original will have a rather thick paint speckling on the midsole. However, the fakes tend to have a light paint speckling, and it gets particularly obvious if you put the units one near the other. This is the same for the speckles themselves. Even the box pull holes look of a high quality and they are larger on the original.

Sometimes you can spot a fake from its box. Fakes tend to have a bolder font for the color way code. In addition, you can have color fading and some missing points like suggested retail pricing that’s usually attached by Nike. Obviously fakes don’t share that, so it’s a good way to spot them. 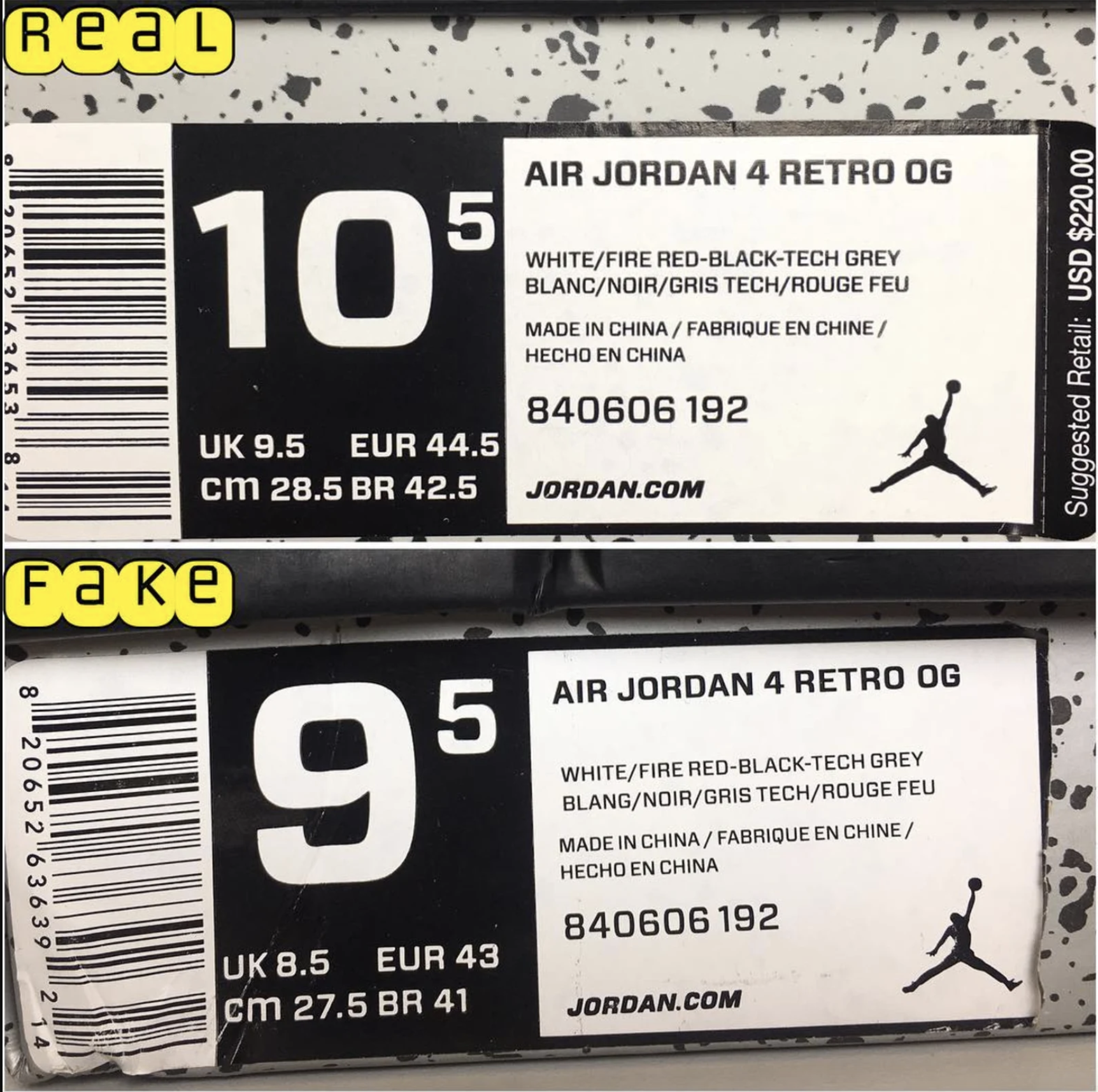 Overall, it’s not that hard to find differences between the original Jordan Retro IV and fake counterparts. In order to do that you need to understand more about how an original should look like and what features you can expect. It’s important to know these differences, as it will make it easier for you to avoid wasting money on Jordan Retro IV fakes instead of the real deal.