How to tell if your Air Force 1 Cactus Jack Sneakers are real or fake?

How to tell if your Air Force 1 Cactus Jack Sneakers are real or fake? 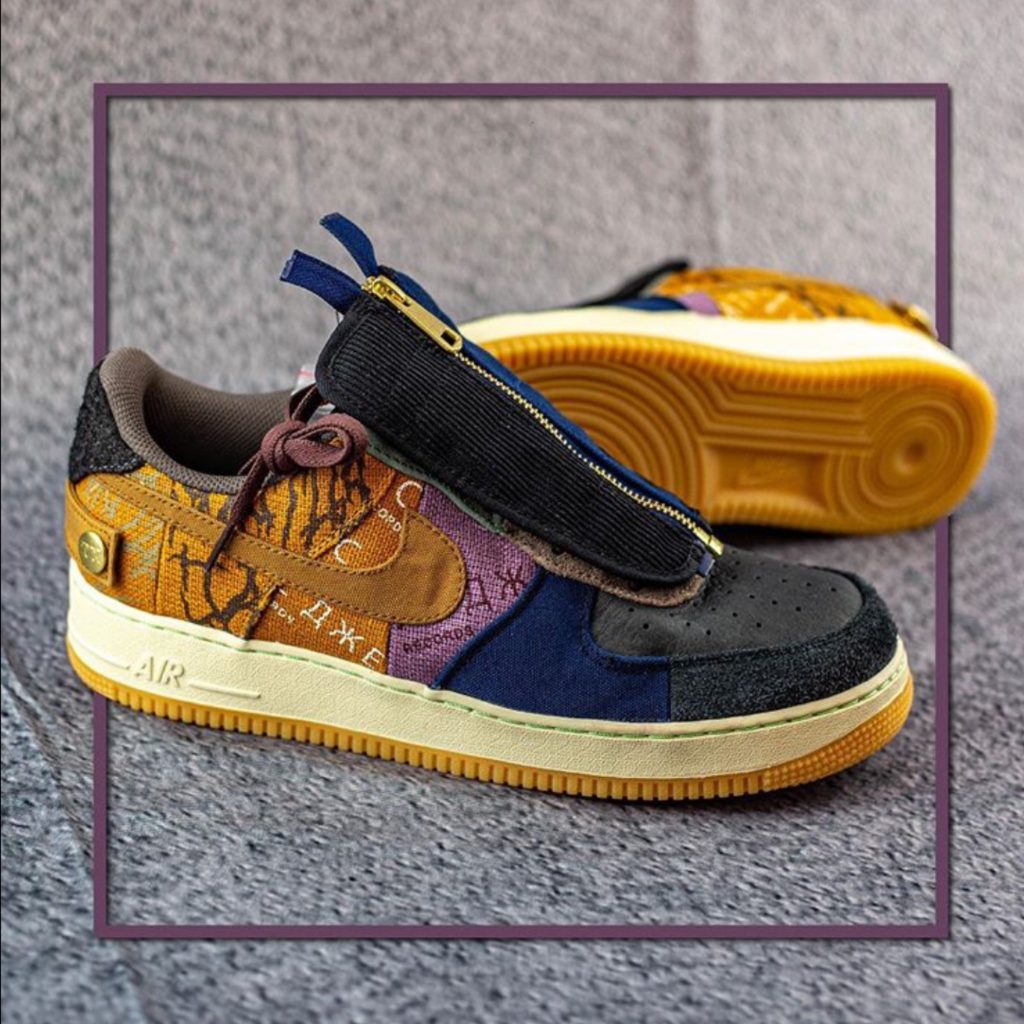 Air Force 1 “Cactus Jack” is one of the most coveted sneakers today. Unfortunately, this also attracts many counterfeits. Even before the release, there were many different fake sneakers in different qualities. For this reason, here we are going to discuss on how to spot fake Air Force 1 Cactus Jack Sneakers.

The letters on the label should be spaced regularly:

There is an incorrect color code on the labels of some fake sneakers. There are also differences in the font used and the white part of the barcode is larger.

There may also be deviations in the text. Some labels do not say “Air Force 1 Low / Cactus Jack”, but “Air Force 1 Low Travis Scott”. Also, make sure, a standard sole is used on the AF 1 TS. Here it happens that the structure of the sole is more defined in some pairs than in others.

Logo on the box:

The logo on the box should have a strong blue and stand out from the rest of the box. Fake boxes can often be recognized by the fact that a different cardboard material is used and the Nike logo is not highlighted.

Nevertheless, original boxes are already used in many fake sneakers, which is why the box can only detect a counterfeit to a limited extent.

The Nike logo on the side of the box should also be finished with a relief varnish and stand out from the box. Many boxes of fake sneakers lack this detail. 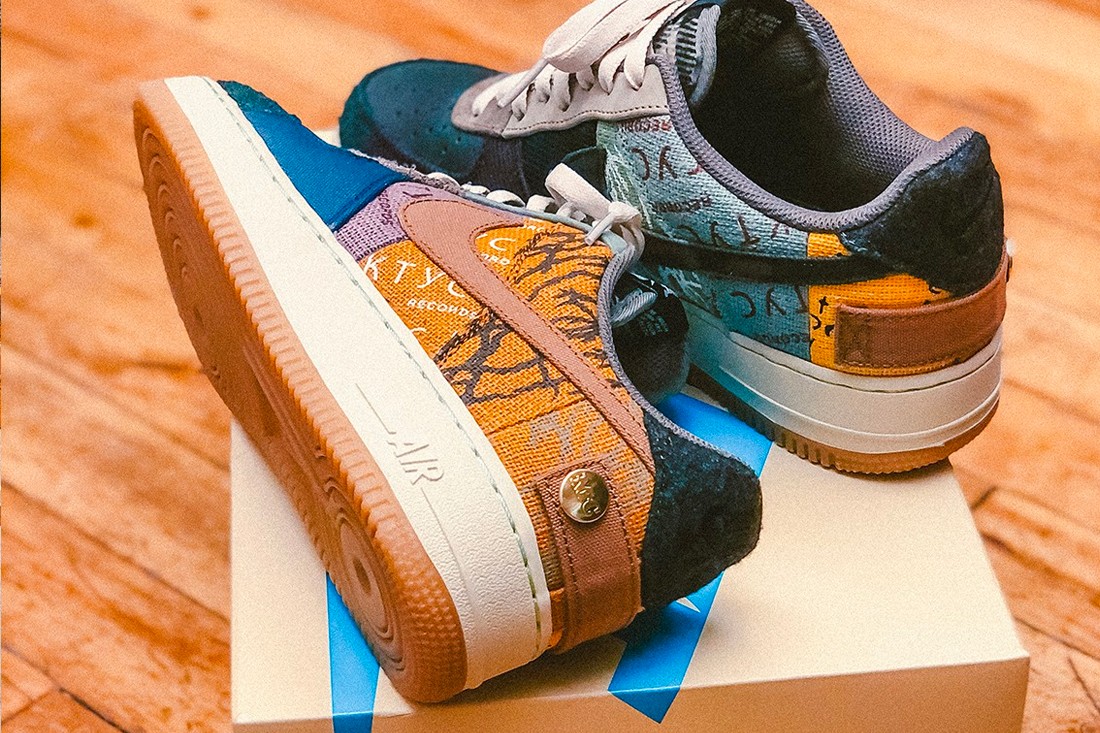 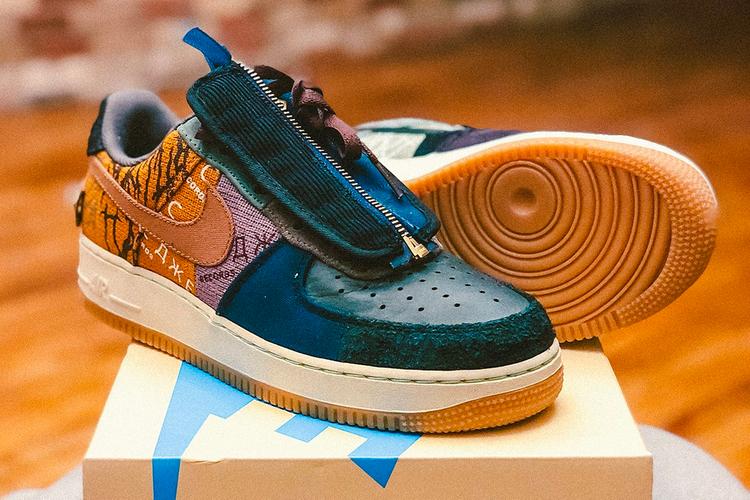 As with all newer original shoes from Nike, the AF1 also comes with a QR code on the inner label. The production period on the tag should be between the second and fourth quarters of 2019. Many fake sneakers use a different font as well as the font thickness and arrangement of the letters, which ultimately leads to a changed picture.

In original Air Force 1 Cactus Jack Sneakers, the shoes come with two additional laces. A dark blue and cream pair. And also, the plastic bags should be the right size so that there is little free space in the bags. In the fake sneakers, these things are missing. 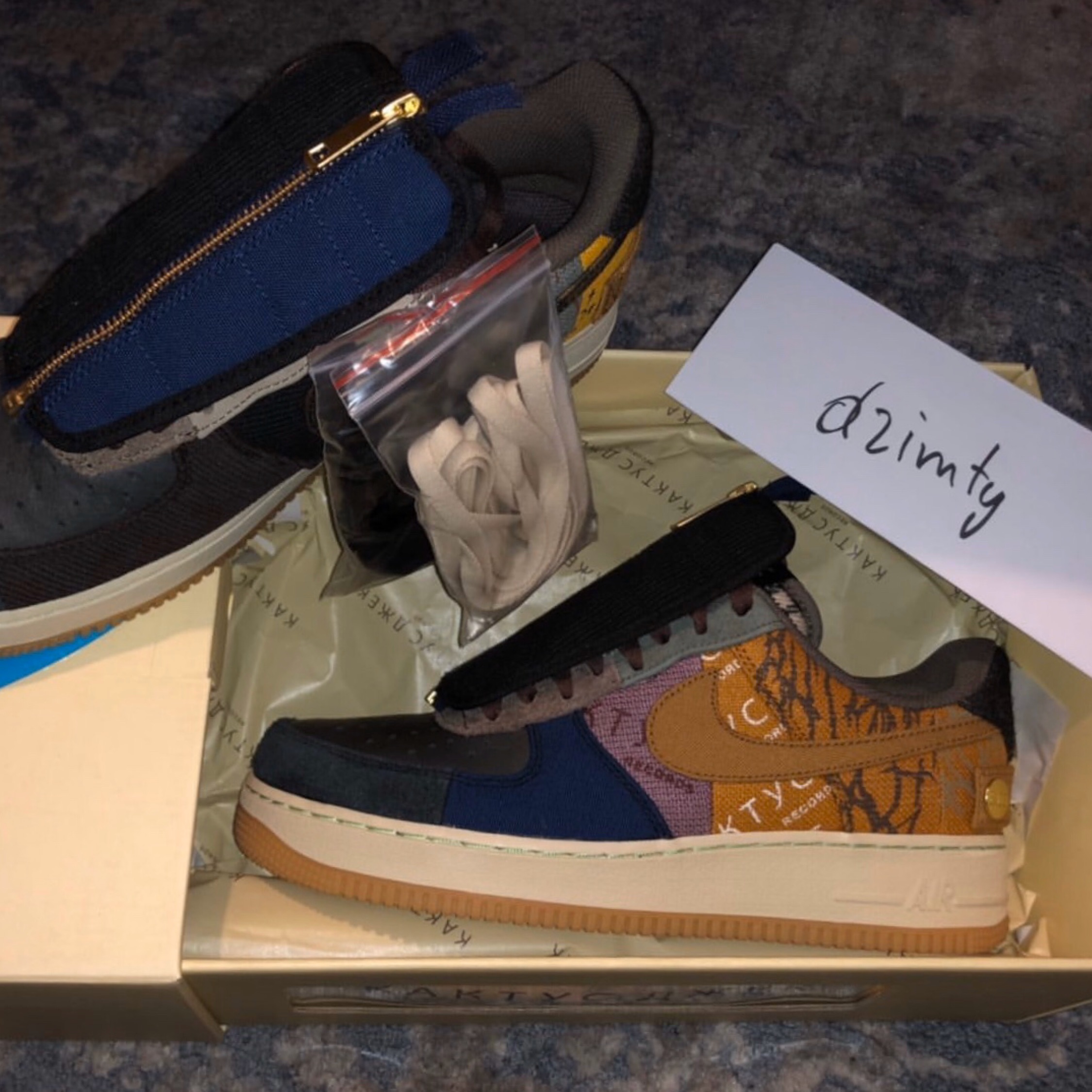 In the original pair of Air Force 1 Cactus Jack Sneakers, the “Nike Air” logo should be visible. While in the fake one, the same thing is not clear and visible. 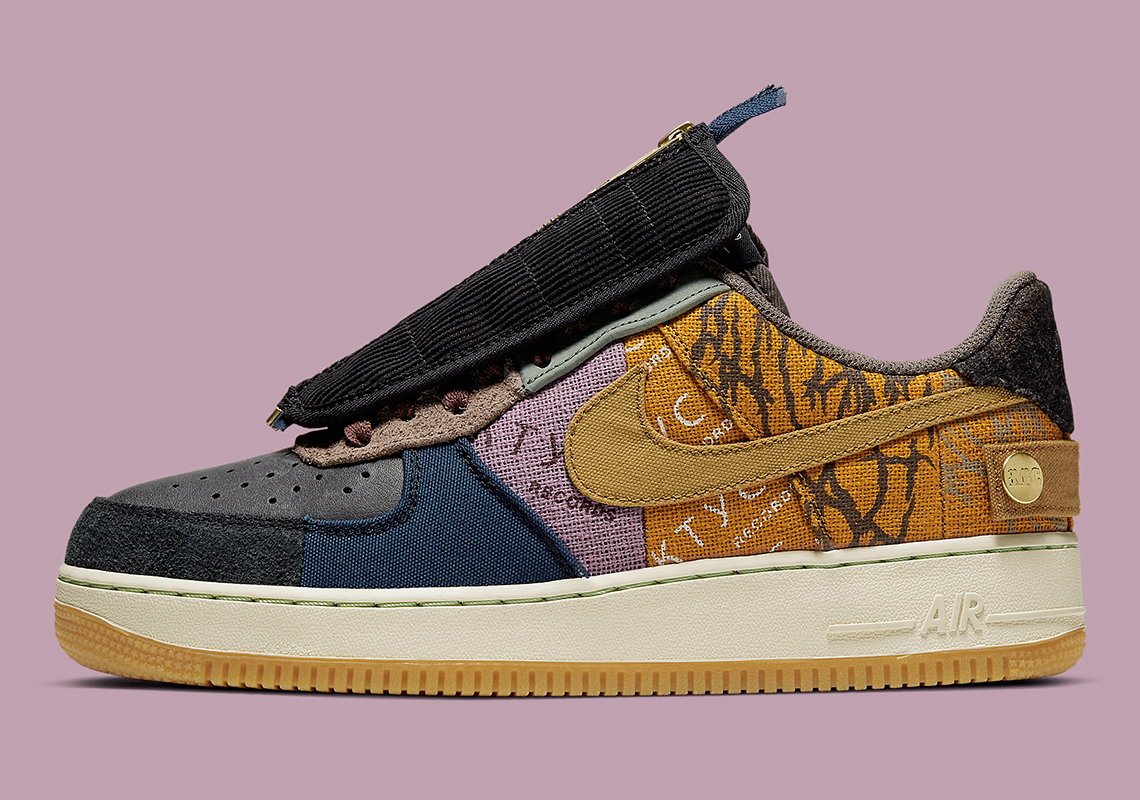 Space on the white midsole:

On the real sneakers, the space on the white midsole for the Air logo is 3 mm while on the fake pairs, you will notice this space 2 mm. It seems a small point to consider but it is very important. It can easily break the company’s patent.

Ridges on the gum:

This is the last point but not the least, the ridge on the gum rubber sole leads to the pattern stars on the toe and heels are spaced improperly that creates a different feeling in tractions. 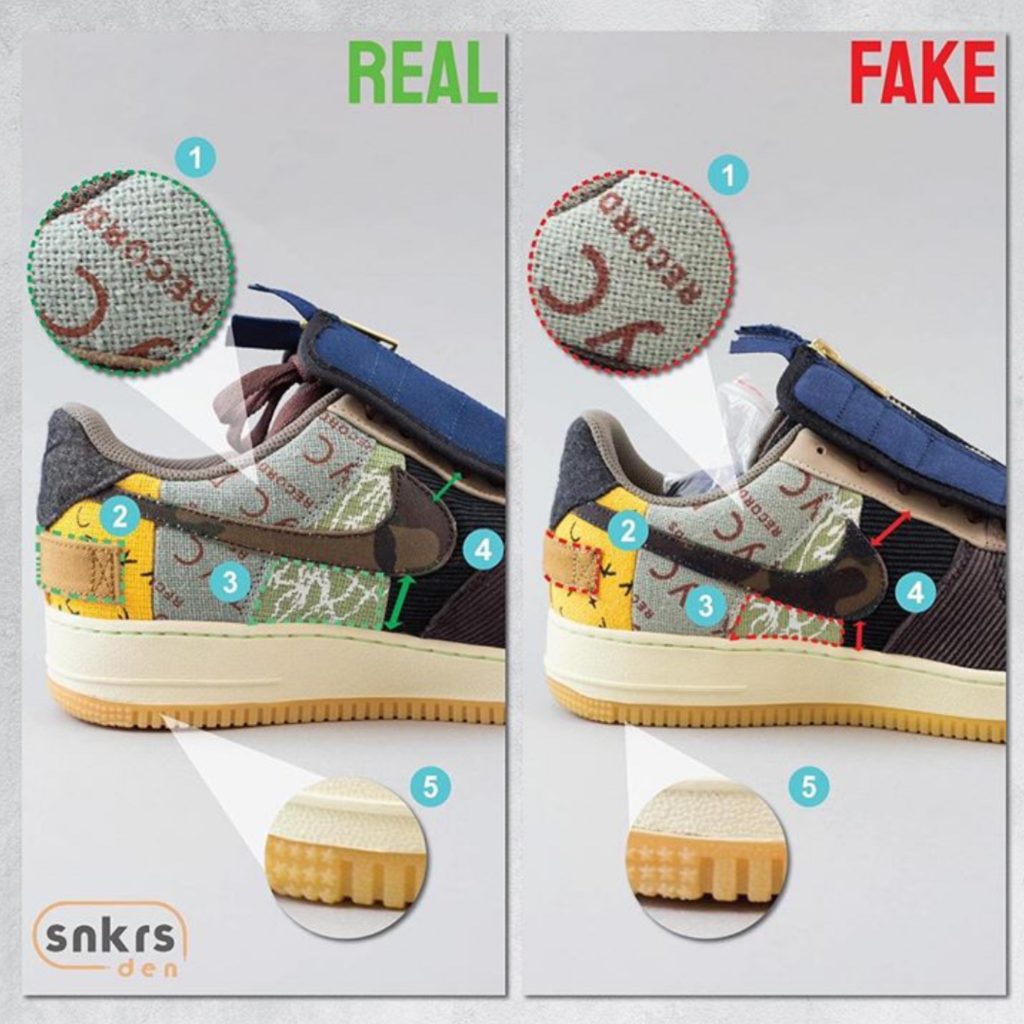 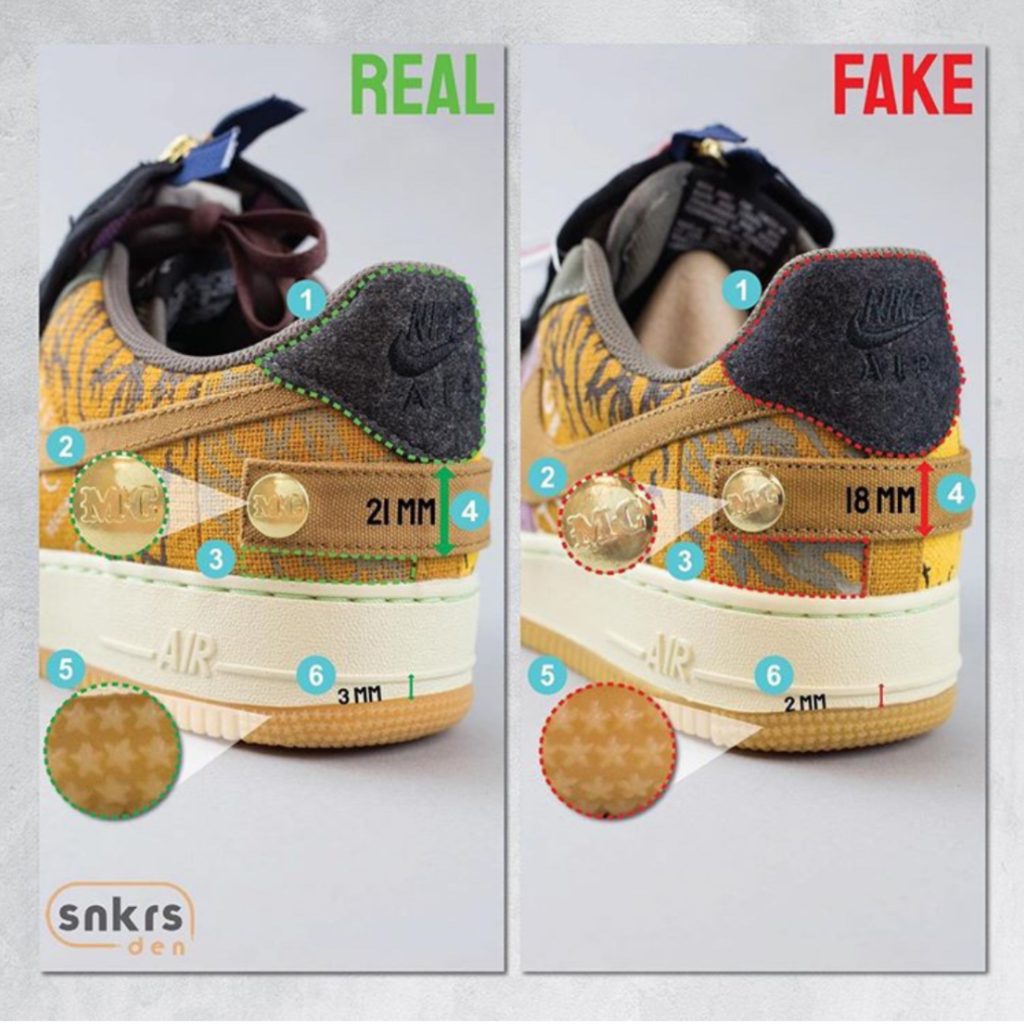