How to Spot Fake Air Jordan 1

Fake Jordan 1s are everywhere. You can find them all over eBay and other online websites. Fakes are also sold in some stores, like local sneaker stores. The air Jordan is 1 of the most replicated show, mostly because of the simplicity of it’s design. Although the design is simple, there are a few tell-tale signs of real vs fake pairs. Our guide is here to help You avoid buying a pair of fake Jordan 1s buy showing you the signs fake vs real Jordan 1

When buying Air Jordan 1s the first thing to look out for is price. The minimum Air Jordan 1 high price is usually $160. Mids and Low tops are usually priced at $140 and $120 respectively. Anything less than that is most likely fake unless is being sold in a certified Nike outlet. Low prices and beat up boxes are your first clue that you have a fake, counterfeit, or ilegal b-grade Jordan 1 shoes. Remember, slightly used does not mean the shoes were real Nikes to start with. Slightly used is usually a way for sellers to try and pass of the signs of fake sneakers as normal wear and tear.

The box on fake pairs is usually very low quality. Looking at the box, you will notice that the fake pair is often thinner, the print on the box is often more faint and the tag is usually off. A lot of fake jordan 1 boxes tend to be beat up really bad, this happens during shipping from China. Sometimes the boxes are also damaged because the shoes are shipped out 1 at a time for the company that is selling the fakes. This will often cause the box to be damaged since proper care isn't given the wrapping,

Below is a real box that features the new Jordan 1 black tag. Newer pairs like the Air Jordan 1 Shadows have this new black tag. Look out for this. 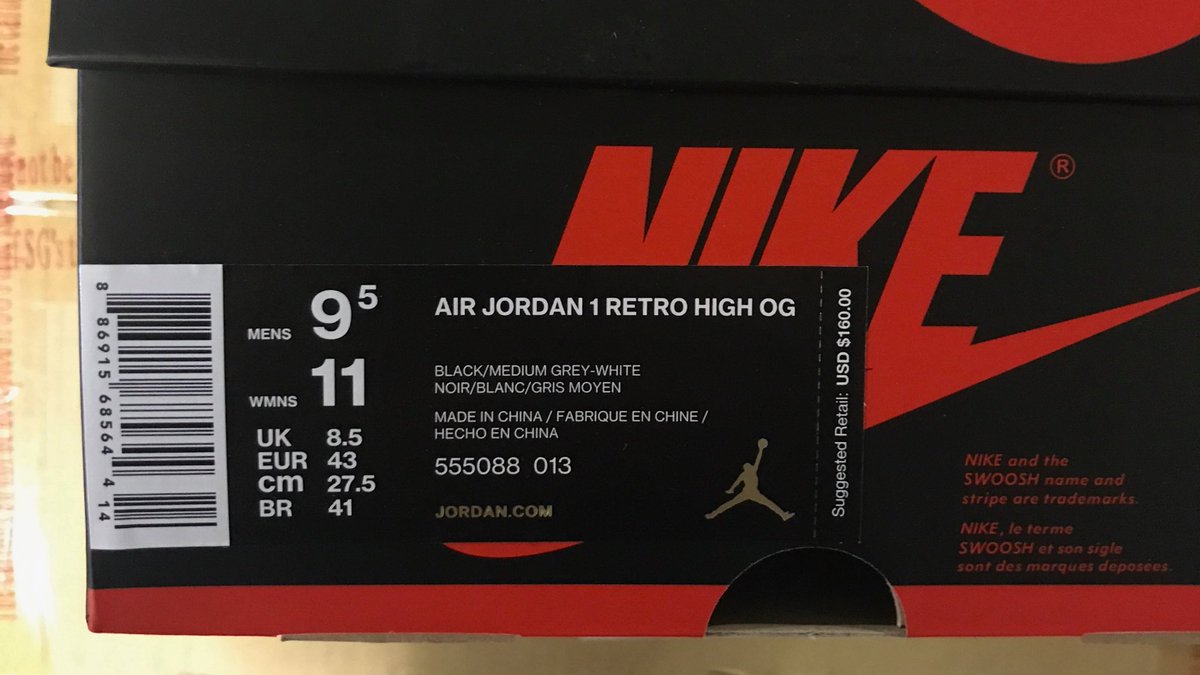 Left is real. Right is fake pair or Jordan 1s

The Air Jordan logo should be embossed and not flat on the leather. You should be able to feel the logo by running your fingers across it. The real Nike does not have any stitching guides to help the stitchers locate the panels during assembly. The red logo panel of the fake Nike is loaded with these little assembly guides. 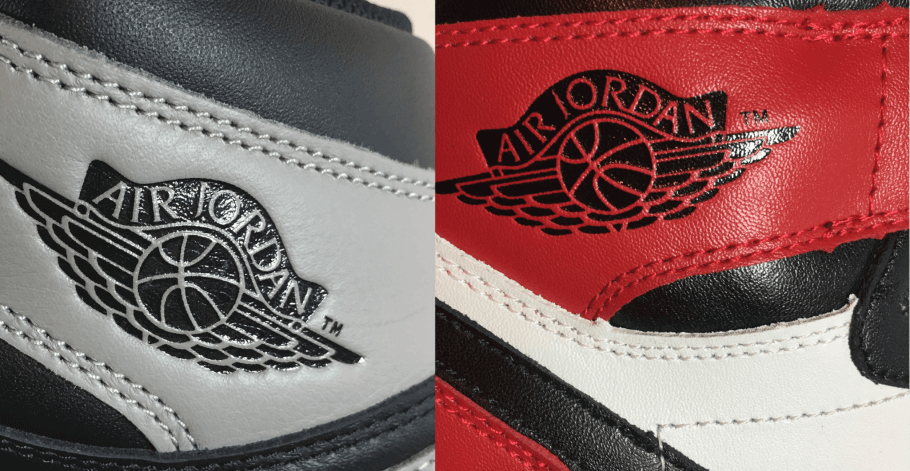 You will notice peaks on the fake pair there is a peak right on the toe box. Air Jordan 1 toe boxes should be smooth all the way around and should not come to a peak in the middle of the toe box.

You will also notice below the toe box holes should be arched. On the fake pair you’ll often see the holes are not arched and sometimes form a straight line. 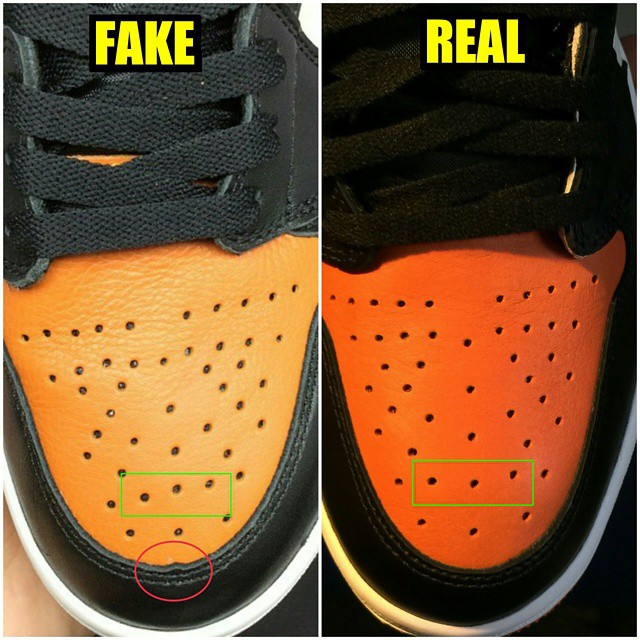 The curvature of the fake pair tends to be a little off compared the authentic. The Nike swoosh on the fake pair is also fuzzier and not as detailed. The quality of the print is definitely inferior to that of the authentic pair. The fake pair also tend to cut off the Nike Air text. There should be some padding/spacing at the bottom of the text and the end of the tag, 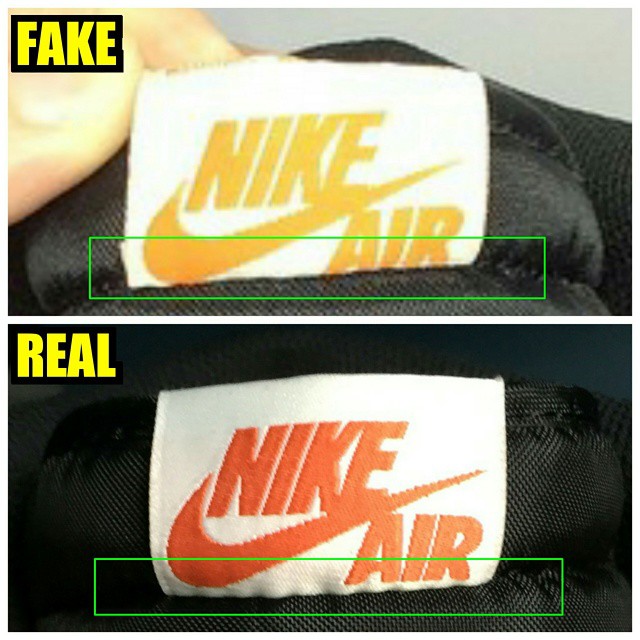 The most common and easiest way to tell a fake pair of Jordan 1s is the heel. It seems the manufacturers have not been able to get the hourglass shape of the heel correct. As you can see below, the real pair has an hourglass shape. The fake pair, the heel just flows straight down in one rectangular shape. Image result for jordan 1 fake vs real heal" 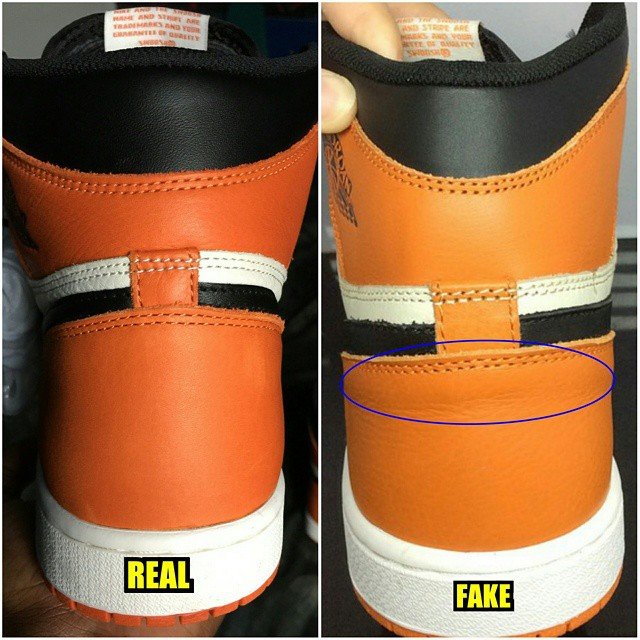 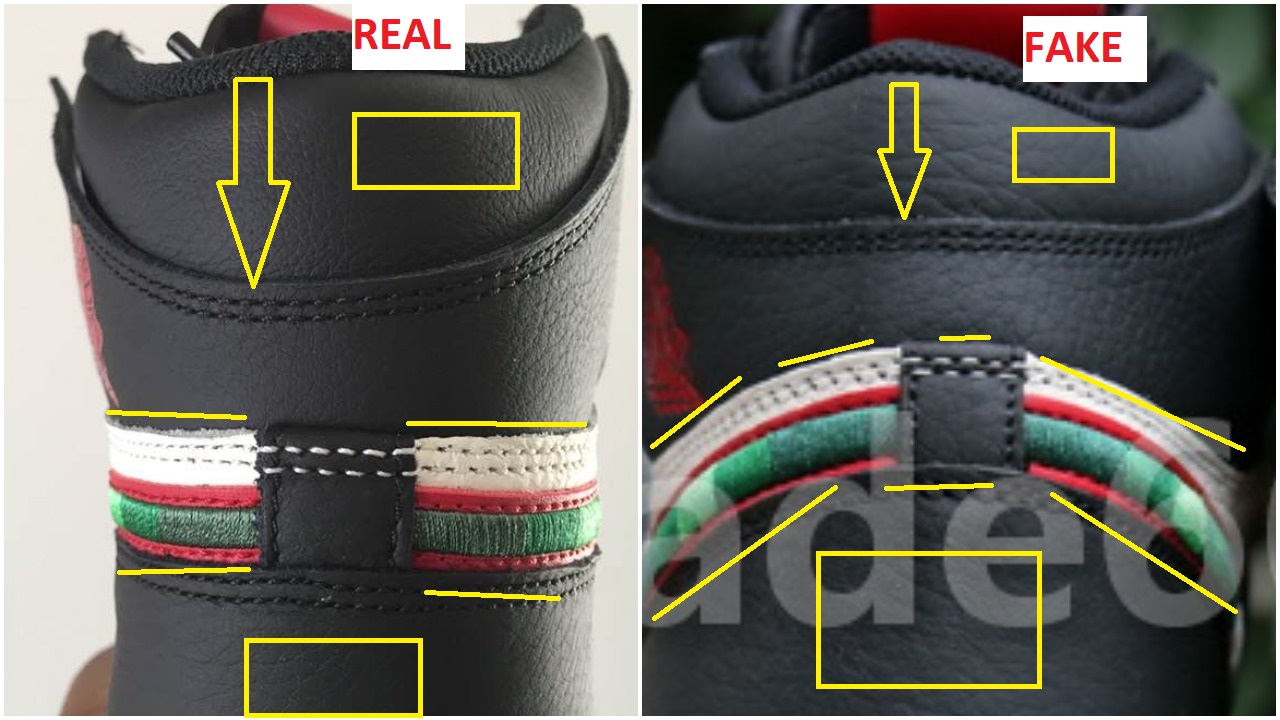 Check the quality on the Nike air logo on the insole. The fake pair will have a low quality logo that almost looks ready to fade. It will most likely fade after just a few wears. On a real pair, the logo will still be visible after multiple wears. 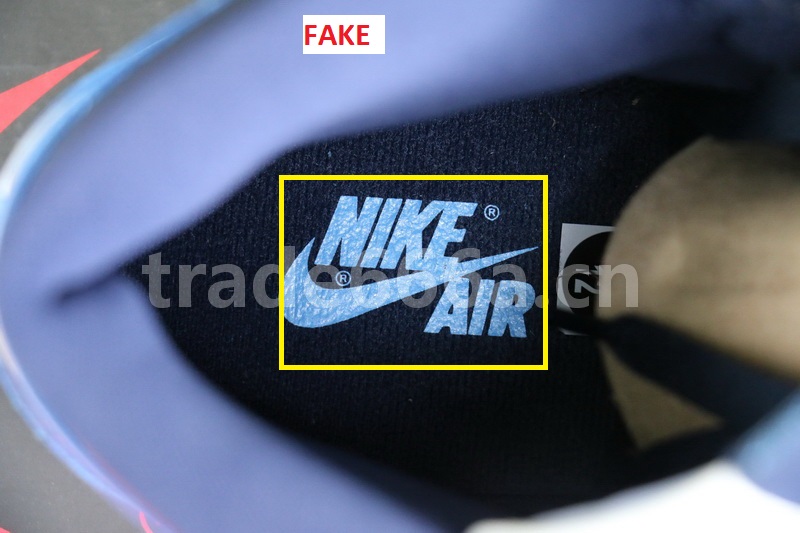 1.Check whether the hourglass shape is present. This is always the easiest way to spot a fake pair. Most fakes will not have an hourglass shape. If you have a really good quality air Jordan 1 replica that is able to replicate the shape, then i would check the next step below.

One of the best choices you can make is to buy your Jordan 1 for authorized sneaker sellers and avoid smaller stores, auction sites and craigslist. If you want to buy online. I would look at Stockx.