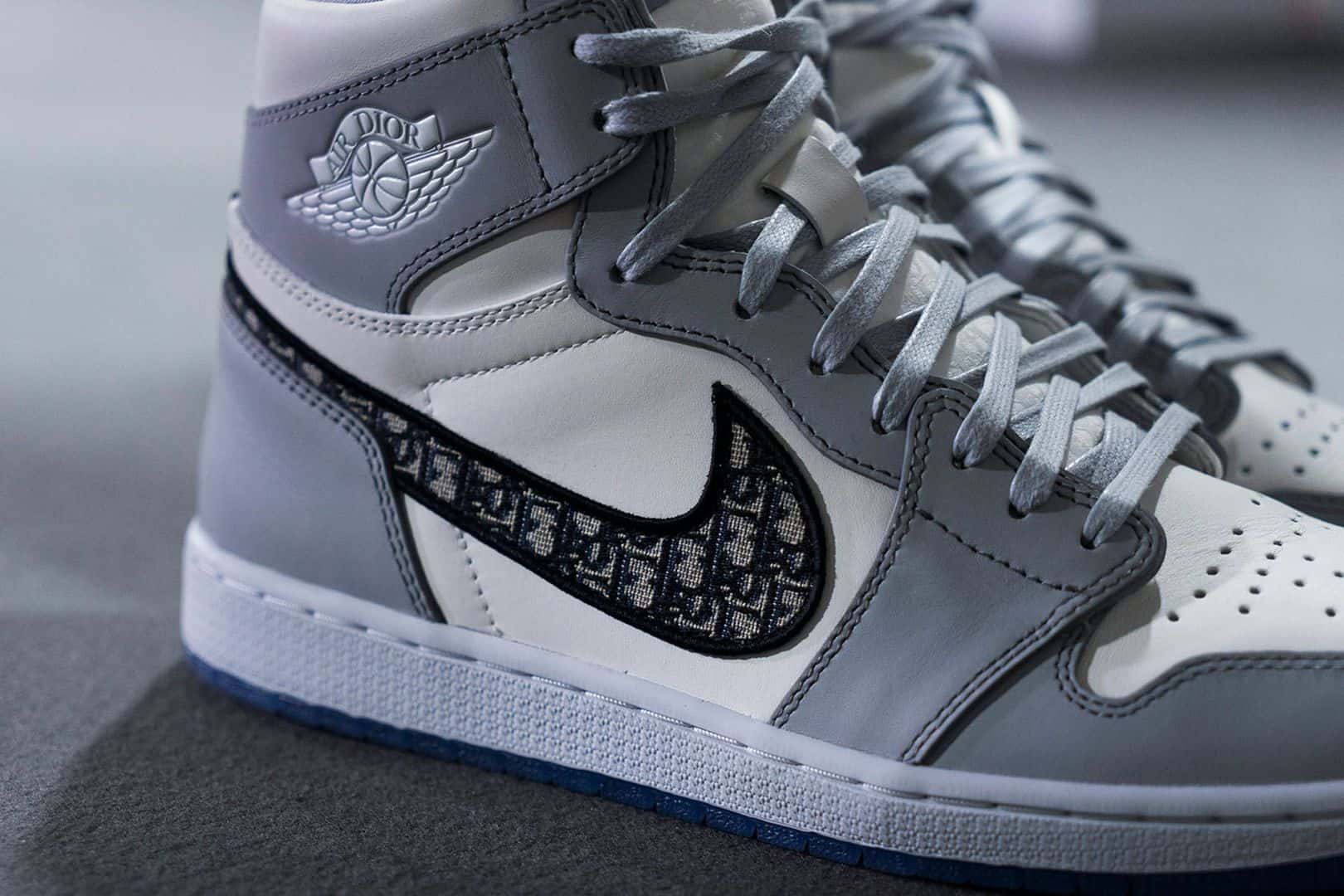 As soon as the highly-anticipated Dior x Air Jordan 1s dropped, it only took a week or so before fans started complaining about counterfeit products being sold in the market. In this day and age, it becomes extremely easy for companies to create close first copies of products, making it even harder to pick out a fake product. There are videos posted by companies, for example, an extremely popular Chinese counterfeit seller Chan who showed first copies of both high and low-top versions of the shoes. Keeping that in mind, it becomes even more important for shoe lovers to be extra vigilant when buying admittedly expensive shoes. We have created a list that will be one of the easiest ways to check the legitimacy of your Dior Jordan 1’s.

As a highly awaited collaboration 2020, the Air Jordans were under the radar of some of the country’s most popular shoe enthusiasts. With the luxury powerhouse Dior and a popular sportswear industry leader like Nike, the result was a minimalist, two-toned color design that allows for unlimited styling.

Look for the outer side of the shoe that has the left “swoosh”. The stitching on the authentic shoe has a much darker, almost black shading. However, the counterfeit with a fake “swoosh” looks much lighter than the original Air Dior, and the oblique pattern is almost faded. The shape of the swoosh is different for both pairs. Plus, you’ll find the Air Dior logo on the leather flap looking much smaller in the fake one. 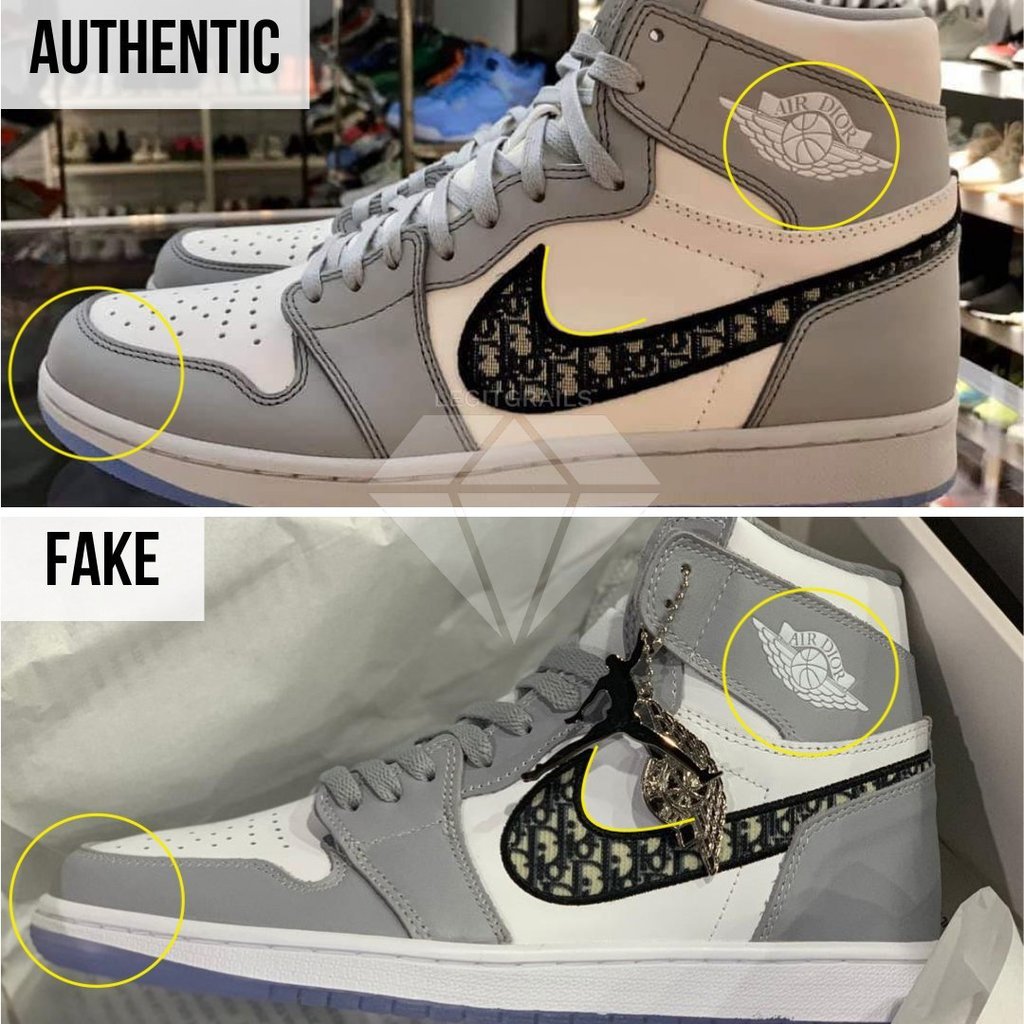 Both sides of the shoes are going to be indicators of fake vs. real Air Jordans. The heel of the authentic shoe is much higher than that of the fake one, but there is also a chance that there are minor differences in sizing that can create the difference even in authentic Nike Air Jordan Dior. Moreover, the monogram pattern on the fake Air Jordans is likely to be darker, as the authentic ones are always like and legible. 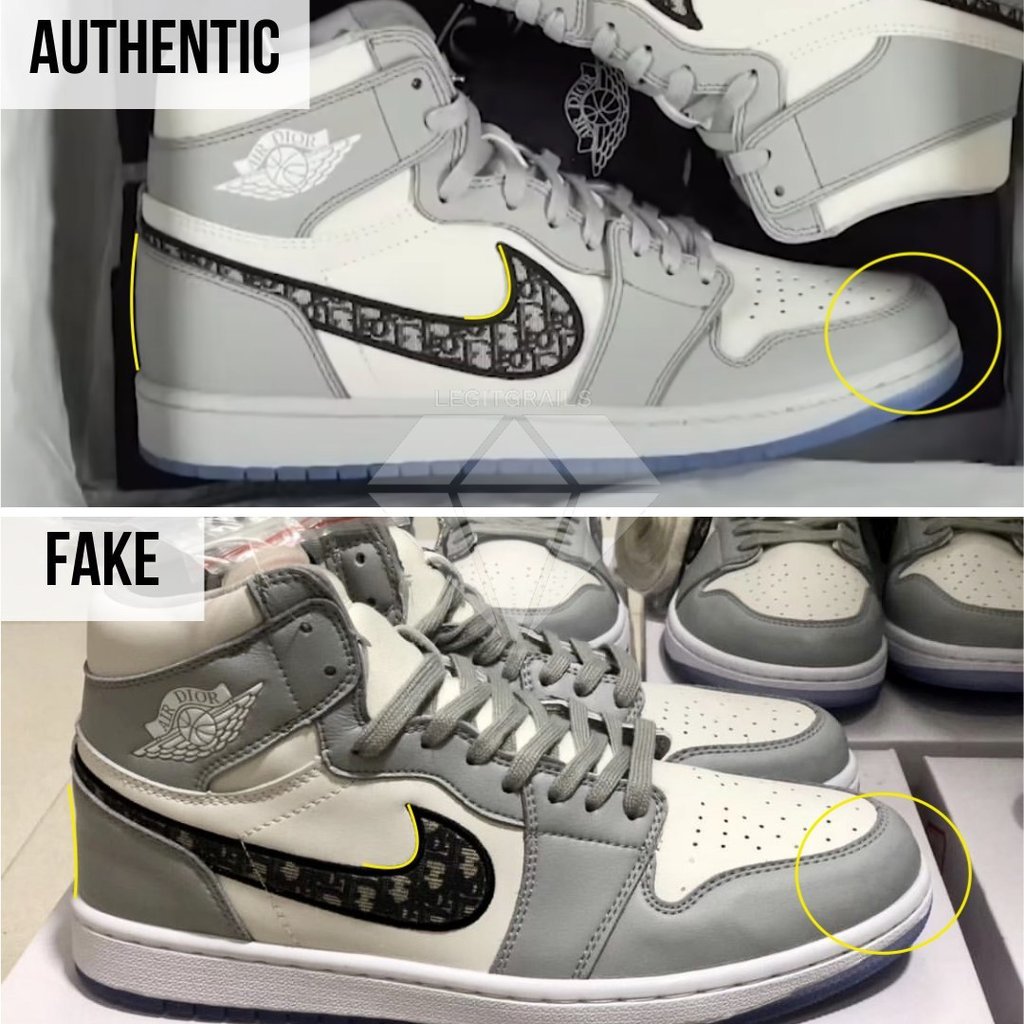 Air Jordan 1 High Dior interior side of the shoe

One great way to spot a fake Air Jordan is by having a look at the text inside the shoes. The counterfeit shoes use a different font for the “8500” text. The 8500 is significant because it stands for the fact that Dior AJ1s Retro Highs were stocked for only an amount of 8500 pairs. You are likely to never see authentic AJ1s with a different font for the number. Difference in footbed

The fake AJ1s will have their text on the footbed improperly font-weighted. The Dior monogram on them is thinly embossed as opposed to the authentic AJ1s. The text is also thin on the former, while the latter uses a thicker font.

You will also notice the difference in stitching for both shoes. The Original Air Jordan 1s will have barely noticeable stitches, while the counterfeit will have thick and dense looking stitching.

Another tip would be checking if the details are defined. The photo below points out reference points where you should look into it. Check the spacing of the word Air Dior, the placement, and the font thickness/kerning. The wings on the fake show are also badly positioned. 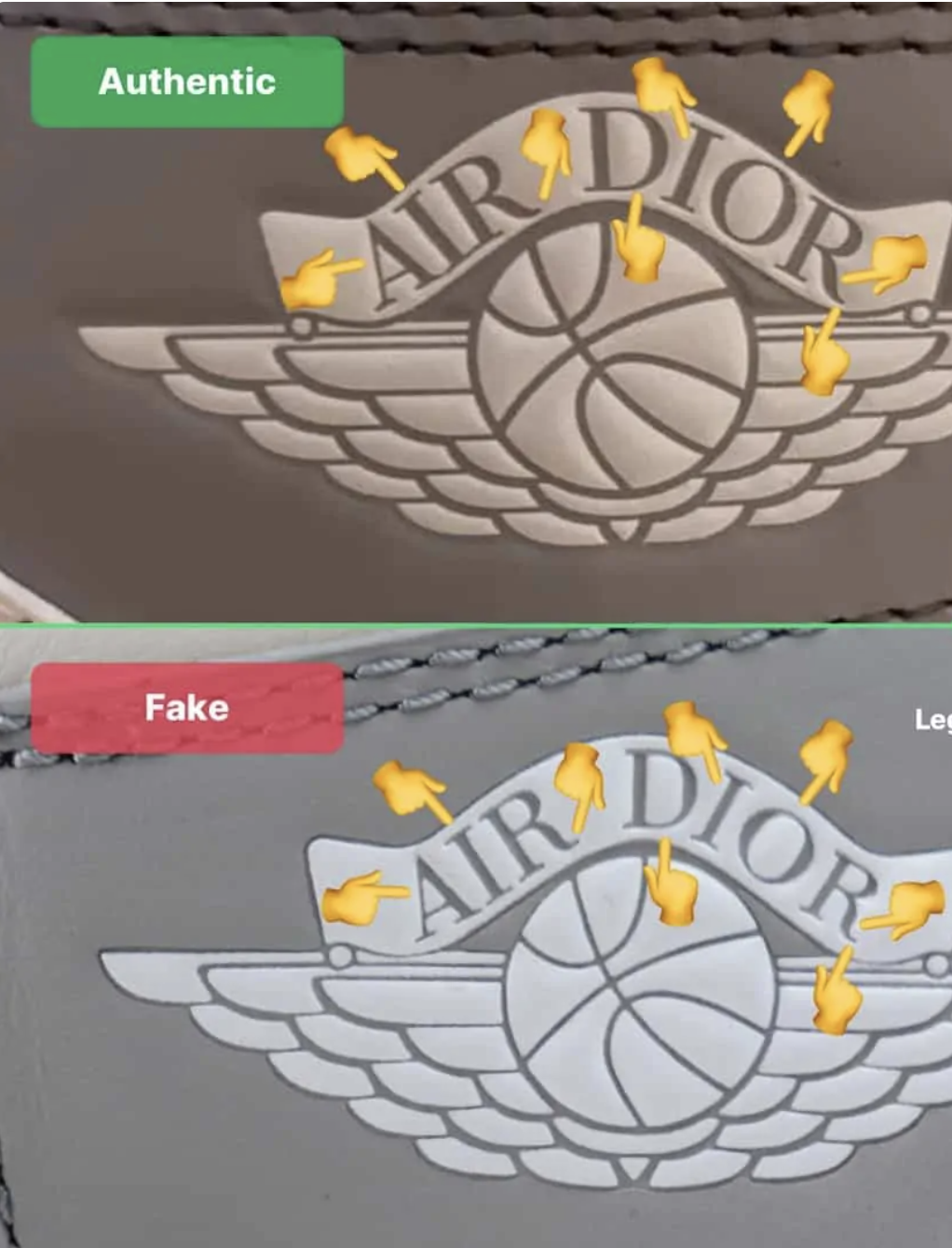 The toe box looks bulkier in the authentic version, while the fake one has a flatter looking toe box. The counterfeit Air Jordan 1 Dior sneakers have perforation holes that are too big and too wide, and that gives the shoes a different look than the look of the authentic ones. 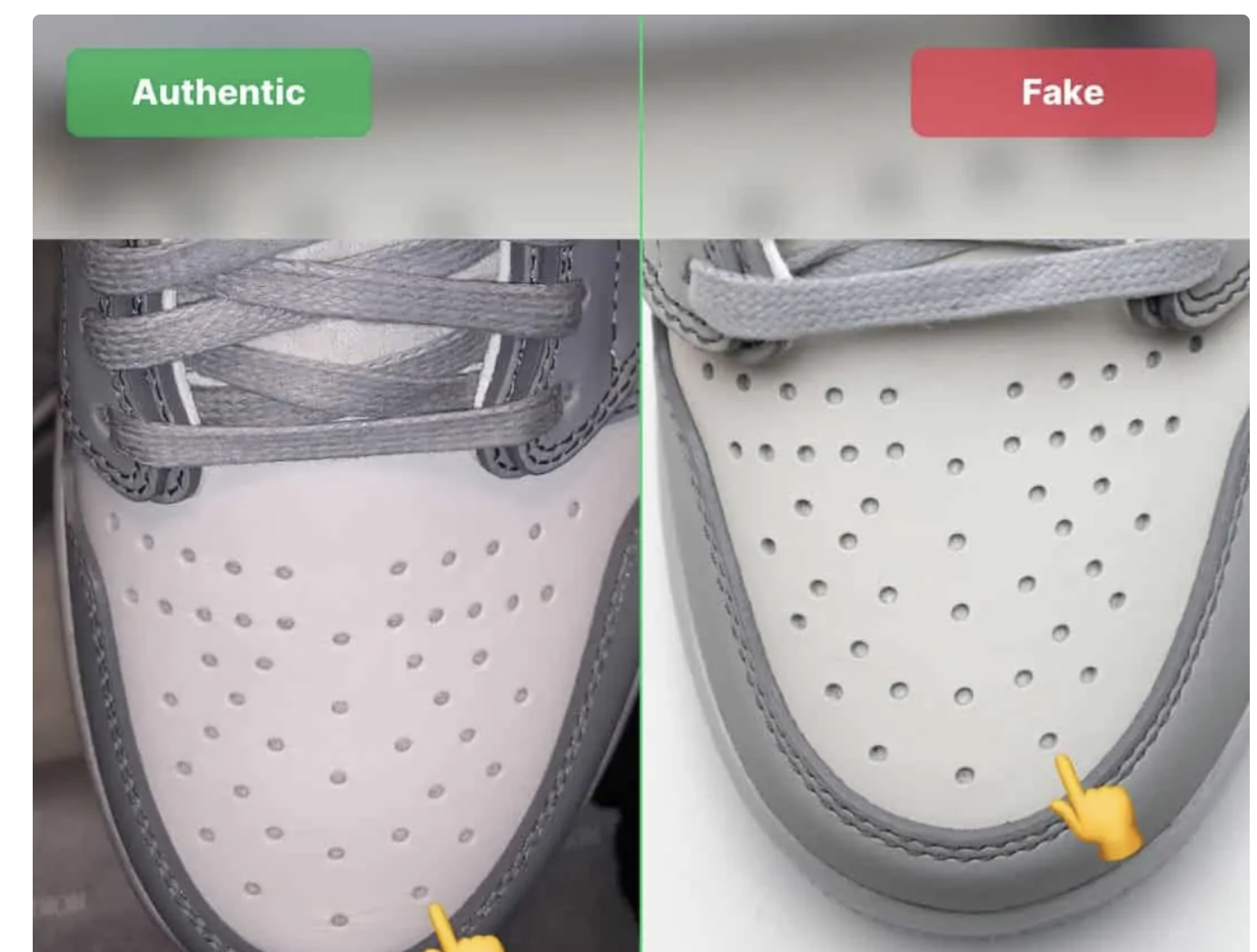 The fake Air Jordan 1 Dior usually comes in a black fake Nike box which is very low quality. What you should expect in your real pair is a high quality sturdy white Dior/Airbox. 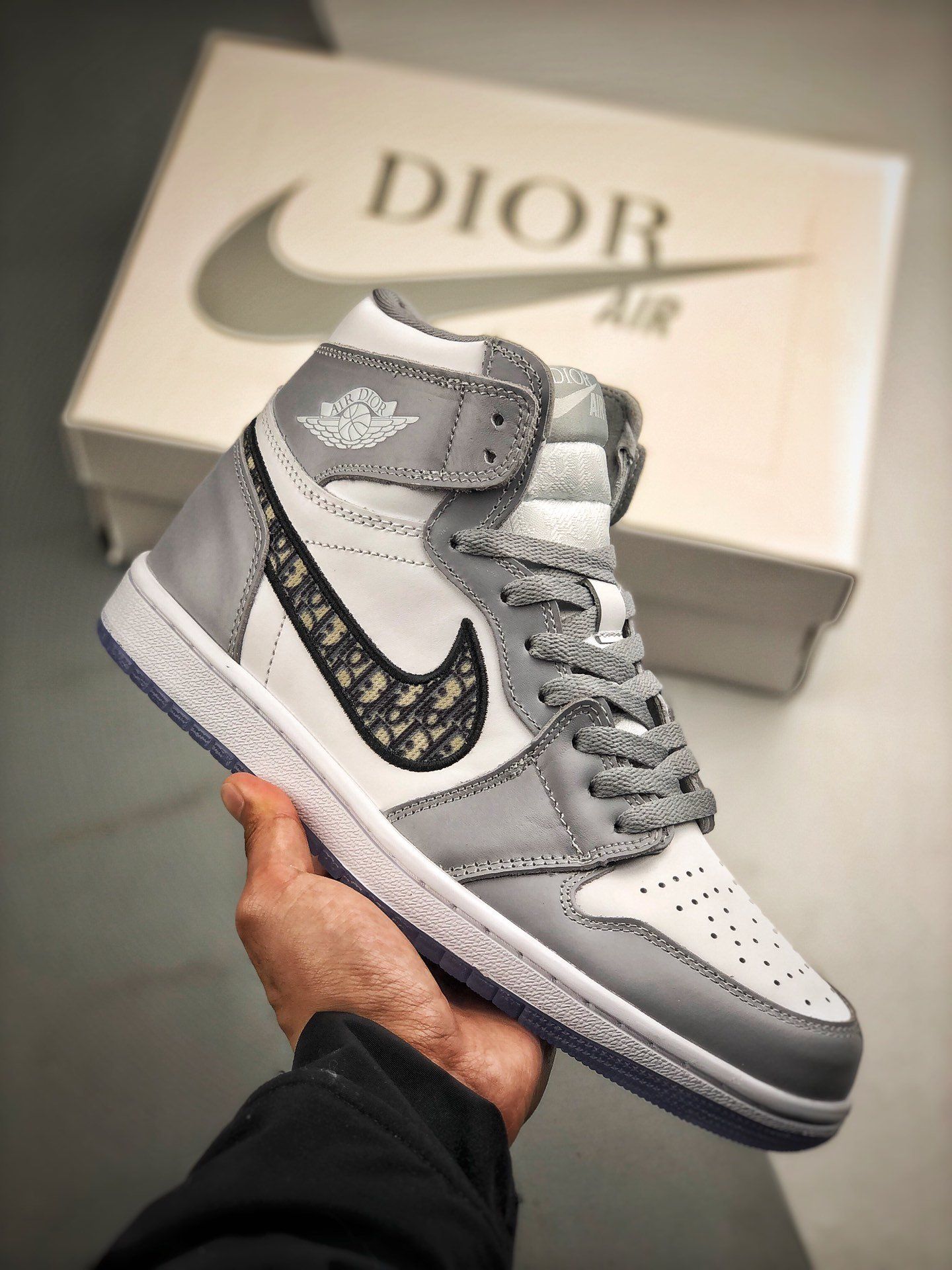